Along with European partners and supporters, we are connecting and marking a 1000km walking and cycling route that echoes the line of No-Man’s Land along the Western Front. The route is the biggest single commemorative project underway on the globe and represents a forward- looking approach to cooperation, collaboration, and education.

The Belgian section is complete, with over 450 plaques in place on 100km of the walking route, and 35 larger plaques on local points of interest. Another 60km has been added as an eastern branch off the main route taking in the Commonwealth War Graves Tyne Cot Cemetery and The Langermark German War Cemetery.

In France, 3000 8cm diameter markers have been sent out to communes to be erected along the route in sections including Vimy, Auchy-Les-Mines, Loos, Pfetterhouse, Pinon, all of the Pays Du Coquelicot and Luneville. Over 100 larger plaques are up on town halls, tourist offices and museums to guide you as you travel.

The Western Front Way travels through the most beautiful, historical, and varied countryside shaped by millions of compelling human stories and experiences. Our logo is made up of four national flowers of remembrance and we believe we should build paths to unite lives, not walls to divide them

OUR JOURNEY SO FAR…

1915 – 2nd Lieutenant Alexander Douglas Gillespie of the Argyll & Sutherland Highlanders writes home from the front line to tell of his vision of ‘a via sacra’ (a sacred road), a route for peace between the lines; 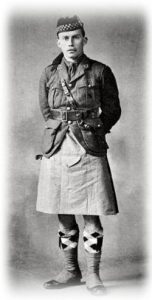 “when peace comes, our government might combine with the French government to make one long avenue between the lines from the Vosges to the sea….I would make a fine broad road in the ‘No-Mans Land’ between the lines, with paths for pilgrims on foot and plant trees for shade and fruit trees, so that the soil should not altogether be waste. Then I would like to send every man, woman and child in Western Europe on a pilgrimage along that Via Sacra so that they might think and learn what war means from the silent witnesses on either side.”

1915 – Gillespie killed in action on the 25th September 1915, days after writing the above letter home.

2015 – This letter is rediscovered by Sir Anthony Seldon, one of our trustees, who has the idea of this grand and unifying vision as the future of commemoration.

2016 –The idea catches the attention of enthusiasts, including great nephew of Gillespie, Tom Heap, who begin walking sections of the route in 2016 and 2017 to gauge interest, viability and support.

2017 – The Western Front Way charity is formed to ensure that this vision is brought to the attention of key stakeholders in time for the end of the centenary.

2018 – The Western Front Way sees the idea begin to grow across Europe and gain support from sites along the route.

2018 – Funding secured by the Department of Culture, Media and Sport in the United Kingdom.

2018 – We become the voice of future commemoration heard globally, and seen as the way to ensure the First World War becomes an eternal memory, as well as a route for peace for all conflict.

2019 – Thanks to generous private donation, we continue onwards with plaque production.

2019 –  May – The Western Front Way sees the first plaques go up along the route.

2019 – June – The initial route is mapped, just as was intended with walkers, cyclists and others making their own journeys along the path for peace first written about in 1915.

2019 – Summer and Autumn – Walkers begin their own journeys, sharing their experiences and stories online as the message spreads.

2019 – Autumn –  Communities continue to put up Plaques along the route and host a series of local launches.

2020 – October – Official inauguration of the pathway in Belgium. Event held in Ypres with international press and WFW team in conjunction with Ypres tourist office.

2020 – Q3 – Plaques send to France with discussions on waymarkers underway.

2020 – On Tuesday 13th October 2020 in Paris, the UK based Western Front Way charity was awarded the European Award for Citizenship, Security and Defence by the ESDA/CiDAN Jury in the category Remembrance and Reconciliation.

2021 – British Embassy in Paris working on the ground to further our cause alongside French Embassy in London.

2021 – Confirmation that over 100 communes are now engaged in France.

2021 – September – An annual walk organised by the Flemish Walking Federation is being organised with over 1,500 participants setting off at different points along the Belgian section.

2021 –  The Western Front Way Representatives in France, Belgium and Germany for further advances of our mission and further plaque deliveries.

2022 – Meeting with Arras mayoral teams to make Arras a beacon for all walkers and cyclists on the WFW.

2022 – Meeting a British Embassy Paris to further influence in Paris.

2022 – Meetings and delivery of assets to key Northern cities.

2022 – Launch of cycling and northern walking section in Arras.

2022 – September – Tom Heap, trustee and relation of Alexander Douglas Gillespie sets off on a 1920’s bicycle from south to north, tackling the 1000km to raise awareness, pay homage, and fundraise.

Our logo contains four flowers of remembrance Poppy, Cornflower, Daisy and Forget Me Not. You will find these logos all along the route.

The Western Front Way welcomes all donations however small. Your generosity will help us to waymark the path in the coming months.

DONATE
Manage Cookie Consent
To provide the best experiences, we use technologies like cookies to store and/or access device information. Consenting to these technologies will allow us to process data such as browsing behavior or unique IDs on this site. Not consenting or withdrawing consent, may adversely affect certain features and functions.
Manage options Manage services Manage vendors Read more about these purposes
View preferences
{title} {title} {title}