Over the past few months we have been asked a few questions, mostly around the same subjects. Below we have answered the most common questions for you. We will keep adding to this as we progress.

What are flowers of the logo?

Why is this called a path of peace?

The lasting legacy of one soldier who wanted peace from the trenches during the war was written about in 1915. This legacy and desire still burns bright. The greatest possible legacy of war, in fact all wars, is lasting peace. Our pathway offers the chance to reflect on the cost of war, and the value of peace above all for all days ahead for all generations for eternity.

Who wrote this letter?

It was written by Alexander Douglas Gillespie, a young man from the Argyll & Sutherland Highlanders. When writing home from the trenches to his headmaster, he first spoke of this path for peace, or via sacra as he referred to it as. He was killed shortly after writing this letter in 1915 in an attack on enemy lines, he was the last officer left standing but his body was never recovered. An image of him can be seen below. 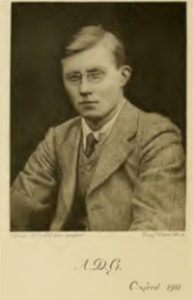 How do I get a plaque?

We need to get plaques up the length of the 1000km. A list of the major centres can be seen in the overall map, a list of all communes and eventual plaque positions can be seen in the more detailed stage maps. If you are on, or know anyone on this list please email info@thewesternfrontway.com and we can organise a plaque delivery.

How do I find out more about amenities, where to stay, what to see etc?

On our overall map, following the place names in the box are email address and websites of tourist offices and town halls the length of the 1000km. They can help out with your specific requests. Our role is to get the plaques in place, and we are not a tour company though there are plenty of available options along the front.

How long is the entire route?

1000 km or 621 miles. You can do this in its entirety or plan return visits to different sections over time. Our app splits the route into manageable sections.

How long would it take?

How to find the plaques?

Where are they up? It is up to the communes and centres to place the plaques but in the main they are on tourist offices, mairies (town halls), and if a larger centre then on both the tourist office and the museum. Do drop in to ask more.

Can it be cycled?

Yes, by all means. How you experience the Western Front Way is up to you. Walk, cycle, drive, its up to you.

How to use your maps?

Our maps show a plaque to plaque guide, more information can be found within the plaque to plaque page. Our intention is to have the whole path waymarked in the future but for the moment, due to a number of reasons out of our control, putting plaques up on centres was the best and only way forward.

Are there maps to help me not made by you?

Yes, Belgium use NGI maps, France used IGN, the references of which maps you need are within the PDF’s of the stage maps.

Should I tell you about my journey?

Please do share your stories through our social media channels. We are a community who rely on each other so the more you can share, the better the experience for others.

When will it be finished?

As soon as we can prove that pilgrims and the public are using the path in numbers its length, the faster we can drive to have the path waymarked and signposted. All sigs are positive and as more people adventure along the WFW, the more there is a desire to see its permanence. We are five years in, but at no point will we give up as we continue on to see this simple and beautiful vision complete and usable for all.

Loading...
Manage Cookie Consent
To provide the best experiences, we use technologies like cookies to store and/or access device information. Consenting to these technologies will allow us to process data such as browsing behavior or unique IDs on this site. Not consenting or withdrawing consent, may adversely affect certain features and functions.
Manage options Manage services Manage vendors Read more about these purposes
View preferences
{title} {title} {title}